Die Hard is a bona fide all time classic. I revisit the movie myself every single Christmas since I was given the box set as a Bar Mitzvah present, and nearly 20 years later, the movie hasn’t aged a day outside of Bruce Willis’ hairline.

A mercifully forgotten era of action filmmaking in the 90s produced dozens and dozens of ripoffs of the Die Hard formula, most of which were more disposable than the first couple of henchmen that Bruce Willis kills in the movie. But! Not all of them were in fact, completely terrible. While most of these films tend to teeter closer to ridiculously dumb side of the cinematic spectrum, these are also masterpieces of the “turn-off-your-brain-and-stuff-your-face-with-overly-buttered-popcorn” school of action filmmaking.

To be considered a Die Hard ripoff, the movie needs to have the following.

1) You need a main character who is in the wrong place at the wrong time and out of their element. The character can be a cop, but usually one that is off duty or in the vicinity for another reason. In other words, he’s that ONE MAN that the trailers always talk about. (This eliminates The Rock since it pairs Sean Connery with Nic Cage as a double team)
2) It needs to almost entirely take place in a single, enclosed location where a group of villains has taken hostages, resulting in a standoff, usually over money. (Sorry Face/off and Taken, you’re missing this part of the equation)

3) You need a thespian actor slumming it as the villain. (This one condition eliminates The Raid (2011), one of the best action films ever made. See it!)

4) Wise-cracks and memorable one liners are essential.

5) There needs to be at least one scene where the hero talks smack over the radio to either the villain himself or the bureaucrats off site giving the hero orders that they ignore.

6) There needs to be a one on one battle resulting in the over the top death of the villain. 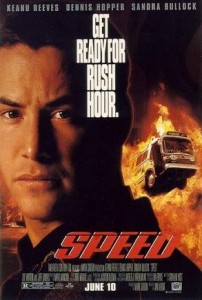 The tagline: “Get Ready for Rush Hour” (Not too shabby! B+)

This is an all time great trailer!

The hero in the wrong place and their job: Keanu Reeves IS LAPD cop Jack Traven, just grabbing his morning coffee when his bus driver friend gets blown up.

The main location with hostages: A bus that will explode if it drops below 50 MPH. This is a bit of a cheat since the bus moves, but the bus counts as a main location. The hostages are the passengers.

Is there a scene where the hero talks smack on the radio?: Several between Reeves and Hopper.

How does the main villain eat it?: Decapitation by subway signal light atop a moving train.

You wouldn't like it when Dennis Hopper drops the stick.

It’s Die Hard: In the mountains

Gotta love the classical music in the trailer

The hero in the wrong place and their job: Sylvester Stallone IS Gabriel “Gabe Walker, a grief stricken mountain climber who must guide a group of elite thieves through the Rockies lest they murder everyone he cares about.

The main location with hostages: The Rocky Mountains and a small group of mountain climbers.

The ransom demand: The villains are making off with $100 million in stolen treasury funds.

The Thespian villain: John Lithgow, who chews through the scenery like it was covered in chocolate sprinkles.
Best wise-crack line: “Keep your arms and legs inside the vehicle at all times!” – Sylvester Stallone

Is there a scene where the hero talks smack on the radio?: Plenty!

How does the main villain eat it?: Falling off the top of a mountain into a monster fireball via exploding helicopter.

I'm giving you this scene in Italian (?) for extra hilarity 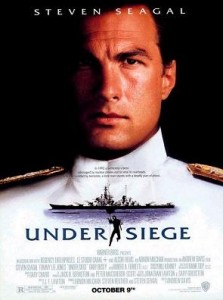 'There's one thing they didn't count on...' - Movie trailer guy

The hero in the wrong place and their job: Steven Seagal IS Casey Ryback, a head chef on an American battleship, who also happens to be ex-special forces killing machine.

The main location with hostages: A battleship loaded with nukes that is on it’s final voyage before decomission. The entire crew is taken hostage during a party.

The ransom demand: The villains plan on stealing the nukes to sell to North Korea for a bunch of money.

Is there a scene where the hero talks smack on the radio?: Yup, to the bureaucrats off the ship.

How does the main villain eat it?: Martial arts knife fight that ends with Jones getting his eye gouged out, stabbed in the head, and thrown through a computer screen. 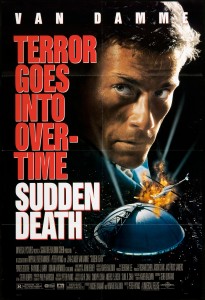 The tagline: “Terror goes into overtime!” (HELL YES IT DOES, A+)

The hero in the wrong place and their job: Jean-Claude Van Damme IS Darren McCord, a fire safety inspector just keeping an eye on things.

The main location with hostages: Pittsburgh’s Mellon Arena during Game 7 of the Stanley Cup finals. 20,000 hockey fans including the Vice President. (By the way, wouldn’t the terrorists’ plans go to shit if the series was over in six games?? I think Game 4 would have made more sense.)

Is there a scene where the hero talks smack on the radio?: Yup, Boothe challenges Van Damme to find bombs scattered throughout the building.

How does the main villain eat it?: Van Damme and Boothe battle atop the arena while Boothe attempts his getaway via helicopter. His helicopter goes down and he screams his way to a huge explosion at centre ice.

'What an explosive finale to this hockey game' 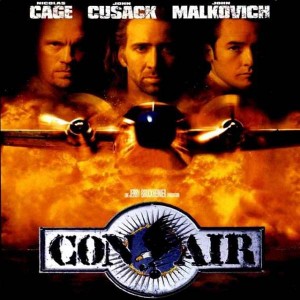 The tagline: They were deadly on the ground. Now they have wings. (Passable… barely. C+)

'Don't get conned out of seeing this flick' *rimshot*

The hero in the wrong place and their job: Nicholas Cage IS Cameron Poe, a parolee with a pretty terrible southern accent hitching a ride home on an armored plane designed to transport the worst criminals in America.

The main location with hostages: It’s right there in the title. The cons take over the plane and take the pilots and guards hostage.

The Thespian villain: John Malkovich, looking ready to take on Stone Cold Steve Austin for the WWE Championship.
Best wise-crack line: ” Put… the bunny… back… in the box.” – Nicholas Cage

Is there a scene where the hero talks smack on the radio?: Both the villains and the bureaucrats!

How does the main villain eat it?: Well… after Malkovich gets his leg impaled with the sharp end of a wooden pole, Cage handcuffs him to a fire truck ladder and extends it while the truck is in motion. Malkovich, still attached, crashes through a glass pedestrian bridge, flies through some power lines that explode into sparks, before landing on a conveyor belt leading to a rock crusher, where his head is flattened like a pancake. One of the best villain deaths ever!

This is how I want to go out

What’s your favorite Die Hard Rip Off? Let me know in the comments, and be sure to check back at SzteinCreative every single Wednesday for a new musing on pop culture! Or you know, like the SzteinCreative page on Facebook!