Warning: "continue" targeting switch is equivalent to "break". Did you mean to use "continue 2"? in /nfs/c07/h03/mnt/111322/domains/szteincreative.ca/html/wp-content/plugins/types/vendor/toolset/types/embedded/includes/wpml.php on line 644

Warning: "continue" targeting switch is equivalent to "break". Did you mean to use "continue 2"? in /nfs/c07/h03/mnt/111322/domains/szteincreative.ca/html/wp-content/plugins/types/vendor/toolset/types/embedded/includes/wpml.php on line 661
 Deadpool (2016) Review (***1/2 out of 5) – SZTEINcreative

I’m going to kick off this review with a point that will make you feel old. Iron Man, the film that kicked off the recent Marvel cinematic universe, was released eight years ago in 2008. That means that someone who was 13 when that film came out can now buy a drink in the US. That can go a long way towards explaining the recent violent and explicit Marvel shows and movies that have come down the pike, including Netflix’s Jessica Jones and Daredevil shows. It’s a natural progression that a kid who grew up watching the Marvel films might want something a little more adult as they enter their twenties. By the way, the rumor seems to be that even the new Wolverine movie is going to be an R-rated gorefest, much like this film.

Here be the trailer!

In other words, this isn’t your Daddy’s Marvel movie. Deadpool is rude, crude, gruesome, sexually explicit, and has some of the most creative foul language I’ve heard since Kevin Smith’s Clerks. But is it any good? The answer is mostly yes. The movie is a hilarious hoot with some very creative action. Taken as the adult comedy that it obviously is, it’s the perfect tonic to the intense seriousness and overwhelming gravitas of the recently passed Oscar season.

Let’s get the bad out of the way. There isn’t a shred of original plotting in this film. It’s every single superhero origin story you’ve ever seen. You’ve seen this plot play out in 1989’s Batman, you’ve seen it play out in 2008’s Iron Man, you’ve seen it in 2000’s X-Men, and you’ve even seen it in The Crow, a movie that Deadpool surprisingly borrows rather liberally from in everything except tone. There’s not much point in discussing or spoiling the plot. It’s your basic: guy falls in love, gets superpowers under extraordinary and sometimes torturous circumstances, seeks revenge that conveniently results in justice, becomes a reluctant hero. If not for the tone and setting, it could be V for Vendetta or any other of the aforementioned films. 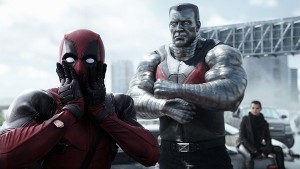 The main villain isn’t the most compelling guy on the block, and is only made memorable by Deadpool’s very creative antagonizing of him and his choice of lame supervillain name. The actor who plays him isn’t very charismatic and his character’s motivations are suspect at best. His female sidekick is an even bigger blank slate who simply appears in the movie to be attractive and participate in a few martial arts fight sequences.

Finally, it’s no secret at this point, but it must be repeated that this is a hyper violent movie and many people will be turned off by the countless scenes of extreme torture, decapitations, heads being blown off, impalements, and one particularly hilarious amputation. It’s mostly played for laughs, and fans of exploitation films, horror comedies and Quentin Tarantino/Robert Rodiguez films that use over the top violence as a comedic vehicle will feel right at home. There are some moments where the film’s lower-than-most-marvel-films budget shows itself with a few suspect special effects, but I personally felt that the sometimes cheesy effects fit the overall vibe of the film nicely. 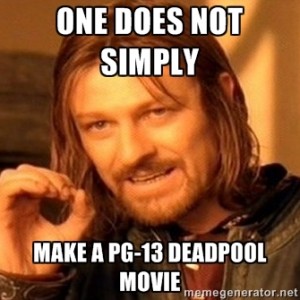 It’s all played for laughs though, and effectively so. Superhero movies have been begging for a big budget parody of all the clichés that nearly all of them subscribe to, and Deadpool nails that aspect. The narration is fourth wall breaking nuttiness that not only mocks superhero films, but also the studio system that produces them. Without spoiling much, a pair of X-Men make extended appearances in the film (because Fox owns the film rights to X-Men). Deadpool makes wisecracks like asking whether James McAvoy or Patrick Stewart is playing Professor X this time because “who can keep these timelines straight?” or questioning why there only seem to be two X-Men in a giant house that gets blown up every few years. He then confirms, in character, that the studio could only afford to include two X-Men. That’s only the beginning for the fourth wall breaking lunacy that at one point results in a moment of fourth wall breaking during another fourth wall breaking moment. “That’s like sixteen broken walls,” Deadpool exclaims.

Either that description sounds like a hilarious spoof, or it sounds like an obnoxiously failed attempt at originality. The constant breaking of the fourth wall and Ryan Reynolds’ snarky narration push this concept to it’s limits, but I enjoyed every minute of it. The film’s tidy hour and 40 minute runtime makes sure that it doesn’t overstay it’s welcome. In a world with overblown three hour super-serious superhero epics, this is surprisingly the one area where Deadpool shows some great restraint, and the film is much better for it. 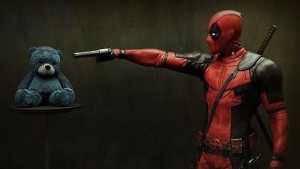 This is the role that Ryan Reynolds was born to play, and your mileage with the film is begin and end for your affinity for his performance. His constant narration is usually funny and he shows a surprising amount of nuance in the title role in a film that is otherwise as subtle as a sledgehammer. There are actually a few moments of genuine emotion, where his wisecracks (intentionally) actually show a glimpse into a man who is scared for himself and those he loves. Reynolds turns Wade Wilson/Deadpool into a fully formed character who is equal parts class clown/rage filled monster/tenderhearted and fearful softie/and reluctant hero. I think Reynolds knocks it out of the park, and it’s about time given his terrible comic book movie record in Blade Trinity, X-Men Origins Wolverine, and the Green Lantern. His supporting cast all looks like they’re having fun, which is super important in a film like this one. My only exception is for the aforementioned villain, whose somber performance struck a bit of the wrong tone. Still, you’re buying your ticket to see Reynolds play Deadpool, and you’ll get your money’s worth there.

The action scenes are generally great. They’re well shot and they don’t rely too heavily on CGI (except perhaps the climactic battle), which is good because the CGI that is here isn’t necessarily the best. Considering how much money the film has made so far, I’d be expecting an improvement in this department for the inevitable sequel. There’s enough action set pieces both played for laughs and thrills that should please any action junkies, especially the opening highway chase that serves as a narrative nexus point for the rest of the film.

Overall, I totally recommend Deadpool, it’s a bloody hoot that doesn’t skimp on the fun and doesn’t even remotely take itself seriously. Just don’t call it the first R-Rated superhero movie. The Crow, Watchmen, V for Vendetta, and Sin City might take exception to that, although I wouldn’t bet on any of them against Deadpool in a fight. Go see it, but leave the kiddies at home. Oh, and be sure to stick around for the end credits sequence, this one is especially worth watching.

I give Deadpool 3.5 severed hands with extended middle fingers out of five.