Quentin Tarantino is an institution. An egotistical, full of himself, pretentious institution. He’s an institution that also happens to have written and directed some of the greatest films of the last twenty years. I knew from the first time I caught a late night showing of “Reservoir Dogs” in the mid nineties on Showcase, a channel that showed all of its films uncensored, that I was watching the work of a brilliant madman. As an artist, he’s a genius, and that’s all any of us should actually care about. 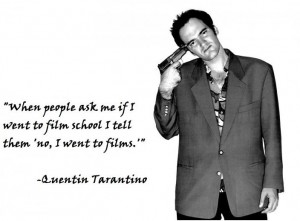 Since Reservoir Dogs, Tarantino has never been shy about expanding his horizons, taking on new and interesting angles on well-trod genres like crime, horror, historical epics, and westerns. You never know what you’re going to get from a Tarantino movie, except of course, for snappy, witty dialogue, creative shot composition, bone crunching violence, great soundtracks, and unexpected plot turns. 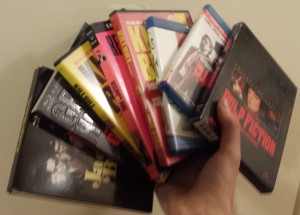 It’s actually really tough to rank his films, because the guy has never made a bad movie, or anything even remotely resembling a bad movie. For the sake of brevity, I’m going to rank his directorial output, which means I’m going to omit a whole bunch of great movies that he was involved in, not the least of which include From Dusk Till Dawn (screenplay and actor), Sin City (in which he directed a single scene), Natural Born Killers (screenplay and story credit), and True Romance (screenplay). Even in the awful anthology film Four Rooms, Tarantino’s segment is the only one worth watching.

With that out of the way, let’s get started!

Tarantino’s worst directorial feature was actually an easy choice, just as it’s easy to point out that this movie is still better than 95 percent of modern Hollywood movies, and most directors would be proud to have this funny and suspenseful film on their resume. Originally screened as a double feature along with some great fake trailers and Robert Rodriguez’ Planet Terror as part of the Grindhouse package, Death Proof is not even the best part of it’s original release. I was far more partial to the hilarious trailers by guest directors and the bad taste lunacy of Planet Terror. Compared to the craziness that preceded it, Death Proof is a relatively restrained and talky experience. The main issue here is that the film is padded with loads of useless dialogue that’s very clever but serves no real purpose in terms of building character or moving the plot forward. Once killer (literally and figuratively) Kurt Russell starts stalking his prey in his “death proof” car, the movie doesn’t slow down, pun intended. When a car full of female targets turns the tables on Russell, the result is an unforgettably thrilling car chase for the ages. It bears repeating that while this is easily Tarantino’s worst film, it’s actually pretty great.

This is an alternately epic and intimate film, filled with nerve-wracking suspense and some very dark humor. The plot is simple even if the minutiae behind it isn’t. Eight awful human beings on both sides of the law are trapped in a haberdashery in frontier-era America, antagonizing one another and building disdain until all hell breaks loose in a menagerie of bad taste and gruesome violence. This is a great film, but it falls prey to some of the same problems as Death Proof, namely, Tarantino is using his clout to overstuff scenes with dialogue with no regard towards the pacing of the film and what said dialogue is actually bringing to the picture. There’s frankly no reason a film like this needs to be three hours long. No individual scene is wasted, but many linger on longer than they need to. A version of the Hateful Eight with 20 or 30 minutes trimmed out would be a much tighter film experience that allows plenty of breathing room and character development with a still beefy two and a half hour runtime. Lots to like here, but simply not as tightly paced as his best work.

Here we have a softer, gentler Quentin Tarantino, and there’s still a scene where a famous actor gets his head graphically blown off by another famous actor in a car. This film is also notable for being Tarantino’s only adapted work, taken from Elmore Leonard’s novel. Tarantino’s follow up to Pulp Fiction is hilarious, violent, and never-boring. The film does suffer from a bit of messy plotting and too many characters to keep track of, a common problem amongst Leonard adaptations. As a black comedy and a love letter to the blaxploitation films of the 1970s, it’s a near masterpiece. Pam Grier in the title role, and a braided-goatee sporting Samuel L. Jackson steal the show with great performances. You gotta love that cool, funk-filled soundtrack too.

Released in two volumes originally, it’s tough to argue that these two volumes aren’t a single entity, albeit one that varies wildly in tone and execution from Volume 1 to 2. The first half is a gleefully violent revenge fantasy, filled with exceptional action scenes choreographed by The Matrix’s Yuen Woo Ping, garishly bright colors, and larger than life performances. The second half is a relatively restrained, darker, less colorful film that derives more suspense from quick bursts of disturbing violence and dialogue, rather than massive action set pieces like the insane action climax of Volume 1. It’s actually a sobering meditation on revenge and spurned love, creating sympathetic villains and a heroine with questionable motives and ethics. It’s a sprawling and thrilling epic, but some may be let down by a climax that brings it all together through character and dialogue instead of an over-the-top climax in the vein of Volume 1. If pressed, I’d say I enjoy Volume 1 more than I did 2, but there’s no point in looking at both as anything other than one complete work.

Tarantino seems to love his revenge plots, and keeps finding unique ways to explore similar themes throughout his filmography. This time around, the man seeking revenge is a black slave (Jamie Foxx) in slavery era America who teams up with a bounty hunter (Christoph Waltz, full credit for his Oscar win here) to avenge the disenfranchised and get his wife back from a particularly nasty slave owner (excellently played by a rarely better Leonardo DiCaprio) who operates a brutal fighting ring with his slaves. Some may say the film is a little overlong and the events that set the climax in motion are suspect, and it’d be tough to argue those points. Despite those caveats, Django is always entertaining, thought provoking, and balances hard-to-stomach violence with goofball exploitation in a satisfying way. The winks to Sergio Leone Spaghetti Westerns combined with the aesthetic and musical cues of the best blaxploitation films of the 70s are welcome and fun to watch.

Tarantino’s shortest and most tightly paced film is a cool, slick take on “the thriller in one location,” made all the more impressive that it was his first film. A diamond heist has gone awry, and the surviving thieves must pick up the pieces and figure out which one of them sold the rest out to the cops. Steve Buscemi, Michael Madsen, and Harvey Keitel especially steal the show amongst a cast of great veteran actors. This is easily Tarantino’s most restrained, tightly paced and focused film, and it hasn’t aged a day since audiences were first horrified by that ear-removal scene in 1992. Oh man, that soundtrack is something else, filled with great 70s classics. You’ll never listen to “Stuck in the Middle” quite the same way after seeing this. One can draw many parallels from this film’s plot to his most recent Hateful Eight, but I personally feel he did this particular plot better the first time around.

I’ll admit, I actually didn’t much care for this film the first time I saw it, namely because I thought it was Tarantino making an attempt at exploring history which is not what this film is at all. After accepting that my expectations were deliciously subverted, I revisited it, appreciating it for what it is, which is a great freaking movie. Rather than keeping things real, it’s an alternate history revenge fantasy (Tarantino’s favorite subject), a perfect companion piece to his later Django Unchained. The disenfranchised here are Jews in World War II, and the villains are heartless Nazis, led by a brilliant Christoph Waltz. When a unit of rogue Nazi killers led by Brad Pitt get wind of a film premiere that will be attended by all of the higher ups in the Third Reich, several groups at once come up with their own conflicting plans to make the film premiere an explosive one. Knowing that the film IS a fantasy puts it in a whole new light. This is Tarantino’s most suspenseful film, with a tension that hits its crescendo through an unbearably tense sequence in a basement bar that signals the arrival of Michael Fassbender as an acting talent to be reckoned with. Tarantino also has a lot to say about the power of cinema to change the world. In the case of Inglorious Basterds, he means that in the most explosive way possible. Just don’t expect a historically accurate ending. Mike Myers has a great cameo as a British Intelligence officer.

Despite Brad Pitt’s final line in Inglorious Basterds, this is actually Tarantino’s masterpiece. This is a great crime saga filled with memorable characters, amazing dialogue, and a storyline that never gets confusing despite being presented completely out of chronological order. The iconic performances from a stable of never-better actors like John Travolta, Samuel L. Jackson, Bruce Willis, Christopher Walken, Uma Thurman, and even Tarantino himself create a world filled with awful human beings that are nevertheless undeniably sympathetic and believable in their actions and decisions. You could make the case that the movie isn’t ABOUT all that much, but that’s beside the point. Much like Goodfellas before it, Pulp Fiction is a snapshot in the life of how the criminal underworld lives and the many ways that these are people just like us; people who like to go dancing, like the shows and music that we like, eat fast food, and generally just want to spend time with their friends and loved ones. They just happen to carry guns, make their living through unlawful means, and don’t subscribe to the same kind of ethical compass that most of us have. There had never been a film quite like Pulp Fiction before, and despite the many attempts in subsequent years to imitate it (including from Tarantino himself), there likely never will be again.

What’s your favorite Tarantino flick? Did I get the rankings all wrong? Let me know in the comments!