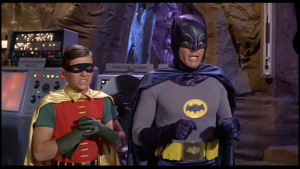 Ok, I’ll admit it, I’m obviously not the first person in the history of the internet to decide to rank any film series in ascending order of quality. Still, there are few things more satisfying to read than some random stranger’s so called definitive ranking of a pop culture series or an artistic output. With that pretentious introduction out of the way, let’s talk about a fictional character that dresses up in tights and fights ridiculous villains in an urban-fantasy setting! 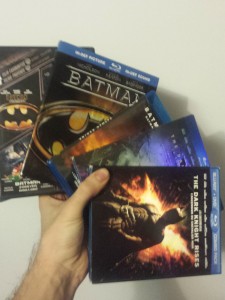 But I digress, I thought it would be fun to rank each of the currently existing Batman theatrical films in advance of the release of Batman v Superman: Dawn of Justice (don’t get me started on that terrible title). Given that this is a listing of theatrical Batman films, I’ll be skipping over some great direct-to-video animated releases in the official rankings, as well as the original serialized films of the 1940s. With that said, I’d be totally remiss if I didn’t give two shoutouts to a pair of fantastic Batman animated films. Let’s get those honorable mentions out of the way, before figuring out which movies had the quality and wherewithal to say “I’m Batman,” and have us buy in.

Honorable Mention #1: Batman: Year One (2011) – Based on one of the best Frank Miller comics of the 1980s, Batman: Year One does the origin story right. The film covers the Frank Miller comic nearly panel for panel, line for line. The dark and gritty storyline is engrossing, and the film features a beautiful art style. I found the voice of Bruce Wayne to be distracting by simply not being the incomparable Kevin Conroy from the early 90s animated series. You simply can’t beat Bryan Cranston (Breaking Bad, Drive) as the voice of Commissioner Gordon, arguably the most important character in this tale.

Honorable Mention #2: The Dark Knight Returns Parts 1 (2012) and 2 (2013) – I certainly respect the original comic more than I necessarily enjoyed it, mostly for taking Batman in a cynical direction in his later years during a time when comics where at their most bouncy and colorful. This adaptation, much like Year One, is slavish to its original source material, gruesome violence and all. A very entertaining two part film, and a different take on The Dark Knight as he faces down not only Superman and his rogue’s gallery of villains, but his own desire to make a difference in the face of old age and irrelvancy. Peter Weller (RoboCop) kills it at the voice of an aged Bruce Wayne. We’ll see how Zack Snyder handles this sort of material in Batman v Superman.

And now… the official listing!

Batman and Robin (1997) – Oh man, is this movie a colossal piece of shit. Even my indiscriminate 12-year old self couldn’t stop squirming after watching this cringe-inducing crap back in 1997. The internet has effectively chronicled every failing of this cynical, campy, and cheesy film that was clearly designed to only sell toys, so I don’t really have to. There might be some entertainment value in a “so bad it’s fun” kind of way, but not really. Everyone in the cast is awful, even George Clooney and Arnold Schwarzenegger. It’s just terrible. In lieu of posting the actual trailer, here’s a compilation of the 100 worst lines in the movie. Good luck getting through it.

Batman Forever (1995) – Not quite as awful as Batman and Robin, but make no mistake, this is also a terrible, terrible movie. Jim Carrey (as pretty much the only thing in the movie worth watching) takes on a bland, vanilla Val Kilmer as Batman. The sets are excessively colorful and garish, Tommy Lee Jones chews up scenery like a lawnmower, and Chris O’Donnell is a stiff board as Robin. The film’s biggest problem? Even with all the colorful stimulation and ridiculous characterizations, it’s so drawn out and boring. This movie’s pace is absolutely glacial. Dammit, I should have used that ice pun for Batman and Robin. Oh well, here’s the most cringe inducing moment in the movie for you.

Batman (1989) – The biggest movie ever at the time, here’s the point in the list where things actually start getting good. The film is more than watchable, even after all these years. Michael Keaton is very good as both Batman and Bruce Wayne even though he’s not given nearly enough to do compared to Jack Nicholson’s excellent turn as the Joker. Tim Burton (making only his third film as a director at the time), directs with confidence and the sets and special effects look great, even in 2016. Of course, the film is loaded with flaws, not the least of which is uneven pacing, some unbelievable plot turns, some stiff action sequences and a messy final half hour that threatens to derail the entire production. The biggest issue though? Batman indiscriminately murders dozens of people throughout the movie, which shows Burton’s fundamental misunderstanding of the Batman character. Still, it’s a fun watch as a cultural curio, and that Danny Elfman score is iconic.

Batman (1966) – Taken as a serious Batman movie, anyone would be justified in hating this Adam West/Burt Ward camp show. As a comedy, there are few out there that revel in their own cheesiness and silliness with absolute aplomb. This is indeed the film where Batman is hanging from a helicopter with a shark clamped around his leg, only to free himself with anti-shark spray he conveniently had located in his utility belt. A camp classic and a funny product of its time.

Batman: Mask of the Phantasm (1993) – This is as dark as children’s films get. Given a surprising theatrical release in 1993, the film noir-inspired extension of the fantastic Batman: The Animated series is a mesmerizing mystery filled with murder, romance, suspense, and some very surprising plot turns. The plot deals with a mysterious figure entering Gotham City and murdering crime bosses and high end criminals. It’s up to Kevin Conroy (Yes!!) as the voice of Batman to get to the bottom of it. Come for the gorgeous animation, stay for the engrossing plot.

The Dark Knight Rises (2012) – The lesser of Christopher Nolan’s Batman trilogy, this film is a glorious mess that tries way too hard to live up the standards set in the previous film, The Dark Knight. Tom Hardy is appropriately threatening (and a little hard to understand) as Bane, Joseph Gordon Levitt does convincing detective work during Bruce Wayne’s extended absence, Christian Bale is reliable as Bruce Wayne/Batman, and Anne Hathaway brings the right amount of sexuality and anti-establishment attitude as Selina Kyle. The best moments in the film are thrilling and unforgettable, especially Bane’s introductory scene at the beginning; but the entire enterprise is tempered by a bloated run time approaching three hours, a flabby middle act, and an ending that some may find unsatisfying. The biggest sin? There’s simply not enough Batman in the movie, a rather inexcusable failing in a trilogy capping storyline. Still, if you’re Christopher Nolan and this is the worst studio film you’ve ever made, you’re doing something right. There’s still tons to enjoy in The Dark Knight Rises.

Batman Returns (1992) – This is one of Tim Burton’s best films. The dark and brooding tone is perfectly contrast with some well placed comedic moments that provide a tip of the hat to Batman’s campier history. The entire cast is primed and game for some over-the-top fun, especially Danny DeVito’s terrifying turn as the Penguin and Michelle Pfeiffer goes all out as a bananas version of Selina Kyle. I also loved Christopher Walken’s relatively restrained performance (only compared to his nutso cast mates of course) as a homicidal business man. The set designs are stunning and the film is never boring. Of course, there’s the still the issue of Batman torching a baddie to death at one point, but we’ve already established that Tim Burton didn’t exactly get that memo about Batman. Great entertaining flick, and an offbeat choice for Christmas viewing.

Batman Begins (2005) – Objectively speaking, Begins is not as strong a film as the number one choice coming up next. Subjectively speaking, this is my favorite Batman movie. Why? Simply put, it’s because this is the only Batman movie where Bruce Wayne and Batman is actually a well-drawn, sympathetic, and interesting character. Every other Batman film is completely defined by their villains, leaving Batman almost as a background cypher. Begins masterfully asks the question as to how a man could dress up in tights and fight crime while remaining somewhat plausible and grounded in reality. The result is simply a triumph of storytelling, and signaled the arrival of Christopher Nolan as a blockbuster force to be reckoned with. Of course, he had already made Insomnia and Memento (both excellent films) before this, but Batman Begins showed he could make an equally compelling film with a huge budget and established property. Christian Bale is excellent in the title role, as are Michael Caine, Liam Neeson, and Cillian Murphy in supporting roles. Katie Holmes is a weak acting link, thankfully being replaced by a much better Maggie Gyllenhaal in the sequel.

The Dark Knight (2008) – This film is legendary for all the right reasons. Heath Ledger’s performance as the Joker is so mind-blowingly awesome that it actually killed him. Ledger won a well deserved posthumous Oscar for his frightening and occasionally hilarious turn as the Joker. The film features all the gravitas of the greatest crime thrillers, which is no easy feat considering it’s a movie about a guy in tights and a cape gliding around the city to battle a psychotic guy in clown makeup. The pacing, the acting, the set-designs, the screenplay, the action sequences, it all comes together in a nearly perfect package. It’s a shame that we lost Heath Ledger so young, but we’ll always have his legendary performance in this film. We are only left to wonder what might have been if he was able to return for the sequel.

What about you? What do you think are the best and worst Batman films?